Jonathan Edwards on the Importance of Calmness for Service

Frustration, worry, anxiety, fears are all part of human experience, and often part of Christian experience - or am I alone? And a troubled state of mind, in whatever guise, can often inhibit our ability to serve others, to pray, to know God. In my experience, worry and frustration all too often are self-inflicted and self-centred. There may indeed be times of genuine inner struggle and turmoil that do not spring from that selfishishness - compare the psalmist's cry of despair to God, Paul's 'fears within', the Lord Jesus: 'my soul is overwhelmed with sorrow to the point of death.' Yet more often than not inner turmoil springs from frustration and anxiety fueled by pride and unbelief. There is much more to be said, but I found the following quote from Jonathan Edwards stimulating. He is considering the specific issue of the Christian's response to insults and injuries received from others, but his comments surely have a wider application. They do not teach that the Christian should expect perpetual serenity and calmness of mind. But they do warn against that agitation of spirit which springs from our sinful attitudes and thoughts in reaction to the way others' treat us or, extending the application, to the circumstances we find ourselves in etc. This too calls for vigilant self-control.

That injuries be borne without losing the quietness and repose of our own minds and hearts. - They should not only be borne without a rough behaviour, but with a continuance of inward calmness and repose of spirit. When the injuries we suffer are allowed to disturb our calmness of mind, and put us into an excitement and tumult, then we cease to bear them in the true spirit of long-suffering. If the injury is permitted to discompose and disquiet us, and to break up our inward rest, we cannot enjoy ourselves, and are not in a state to engage properly in our various duties; and especially we are not in a state for religious duties - for prayer and meditation. And such a state of mind is the contrary of the spirit of long-suffering and meekly bearing of injuries that is spoken of in the text. Christians ought still to keep the calmness and serenity of their minds undisturbed, whatever injuries they may suffer. Their souls should be serene, and not like the unstable surface of the water, disturbed by every wind that blows.

Jonathan Edwards, Charity and Its Fruits pp.73-74
Posted by Jonathan Skipper at 11:03 pm No comments: 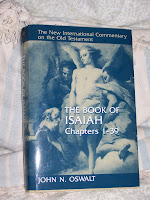 If the ethical imperative is dependent upon human reason alone, that reason is no match for rampant self-interest. In fact, self-interest will press reason into service to justify its own behaviour. Only a prior commitment to the revealed wisdom of God... and a commitment to call good good, despite the reasonings of the wise of this world, can make possible genuine long-lasting righteousness both in individuals and in society. The path of those who chart their own course leads inexorably from self-aggrandizement to the ultimate reversal of moral values.

On Isaiah 8:14-15
For the Lord can be a sanctuary and he can be a stone for tripping over and a rock for stumbling upon for the two houses of Israel; a snare and a trap for the inhabitants of Jerusalem.
Many among them will stumble; they will fall abd be crushed, become ensnared and taken captive.
[translation by Oswalt]

The attitude we take toward God will determine what aspect of him we will experience. To those who sanctify him, who give him a place of importance in their lives, who seek to allow his character to be duplicated in them, he becomes a sanctuary, a place of refuge and peace. But to those who will not give him such a place in their lives, he becomes a stone to trip over. He does not change; only our attitude determines how we experience him. Those who make a place for him discover that he has in fact made a place for them. They know that what happens to them comes from One who is both all-powerful and good. In that certainty they can accept and apply whatever comes to them with equanimity and confidence. Those who will not make a place for him will keep colliding with him and tripping over him, for he is there, whether they acknowledge him or not. Because he is a fact of which their hypothesis does not take account, their experiment will keep failing and he will be the cause of it, not because of some vindictive streak in him, but simply because he is and they are trying to live as if he were not. As the New Testament makes plain, it is in Jesus that the double-edged nature of God's self-revelation because most pointed: to those who accept him as God's sufficient sacrifice, he is life and peace; to those who refuse to do so, he becomes a fact over which to stumble again and again (Matt. 21.44; Luke 2:34; Rom 9:33)

Posted by Jonathan Skipper at 10:14 pm No comments:

This paragraph from Edwards speaks to me of the urgency and necessity of self-control and discipline - not just in relation to the specific sins that Edwards is discussing, but as an overall attitude of mind and heart as we walk through life.

Hence, then, what a watch and guard should Christians keep against envy, and malice, and every kind of bitterness of spirit towards their neighbours! For these things are the very reverse of the real essence of Christianity. And it behoves Christians, as they would not, by their practice, directly contradict their profession, to take heed to themselves in this matter. They should suppress the first beginnings of ill-will and bitterness and envy; watch strictly against all occasions of such a spirit; strive and fight to the utmost against such a temper as tends that way; and avoid, as much as possible, all temptations that may lead to it. A Christian should at all times keep a strong guard against everything that tends to overthrow or corrupt or undermine a spirit of love...

Jonathan Edwards, Charity and Its Fruits p.23
Posted by Jonathan Skipper at 10:22 pm No comments:

The harm of coming into existence?

I recently came across this book:

Better Never to Have Been: The Harm of Coming into Existence by David Benatar

And this is the synopsis:

Most people believe that they were either benefited or at least not harmed by being brought into existence. Thus, if they ever do reflect on whether they should bring others into existence-rather than having children without even thinking about whether they should-they presume that they do them no harm. "Better Never to Have Been" challenges these assumptions. David Benatar argues that coming into existence is always a serious harm. Although the good things in one's life make one's life go better than it otherwise would have gone, one could not have been deprived by their absence if one had not existed. Those who never exist cannot be deprived. However, by coming into existence one does suffer quite serious harms that could not have befallen one had one not come into existence. Drawing on the relevant psychological literature, the author shows that there are a number of well-documented features of human psychology that explain why people systematically overestimate the quality of their lives and why they are thus resistant to the suggestion that they were seriously harmed by being brought into existence. The author then argues for the 'anti-natal' view-that it is always wrong to have children-and he shows that combining the anti-natal view with common pro-choice views about foetal moral status yield a 'pro-death' view about abortion (at the earlier stages of gestation). Anti-natalism also implies that it would be better if humanity
became extinct. Although counter-intuitive for many, that implication is defended, not least by showing that it solves many conundrums of moral theory about population.

Posted by Jonathan Skipper at 10:11 pm No comments: 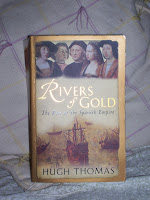 I am currently reading Rivers of Gold by Hugh Thomas. It describes the first two generations of the Spanish encounter with the New World. Here are a couple of fascinating snippets:

There are certain roots which the natives call batatas and grow
spontaneously. The first time I saw them I took them for Milanese turnips or huge mushrooms. No matter how they are cooked, roasted or boiled, they are equal to any delicacy or indeed to any other food. Their skins are tougher than
mushrooms or turnips, and are earth-coloured while the inside is quite white.
When raw, they taste like green chestnuts, only sweeter.

This is the first European description of the potato, recently brought back to Spain from the New World. By Peter Martyr, c.1513 quoted in Rivers of Gold p.373/702

1499. During the exploration and discovery of the New World:

Alonso de Hojeda, Juan de la Cosa & Amerigo Vespucci "landed too on the islands of Curaçao (where they found some exceptionally tall people) and Aruba, where there were numerous natives living in houses standing in the sea 'like Venice'. Hence they spoke of the mainland there as 'little Venice', 'Venezuela'. The name remained.

Rivers of Gold p.216
Posted by Jonathan Skipper at 9:44 pm No comments:

What does 'arenaria interpres' mean?